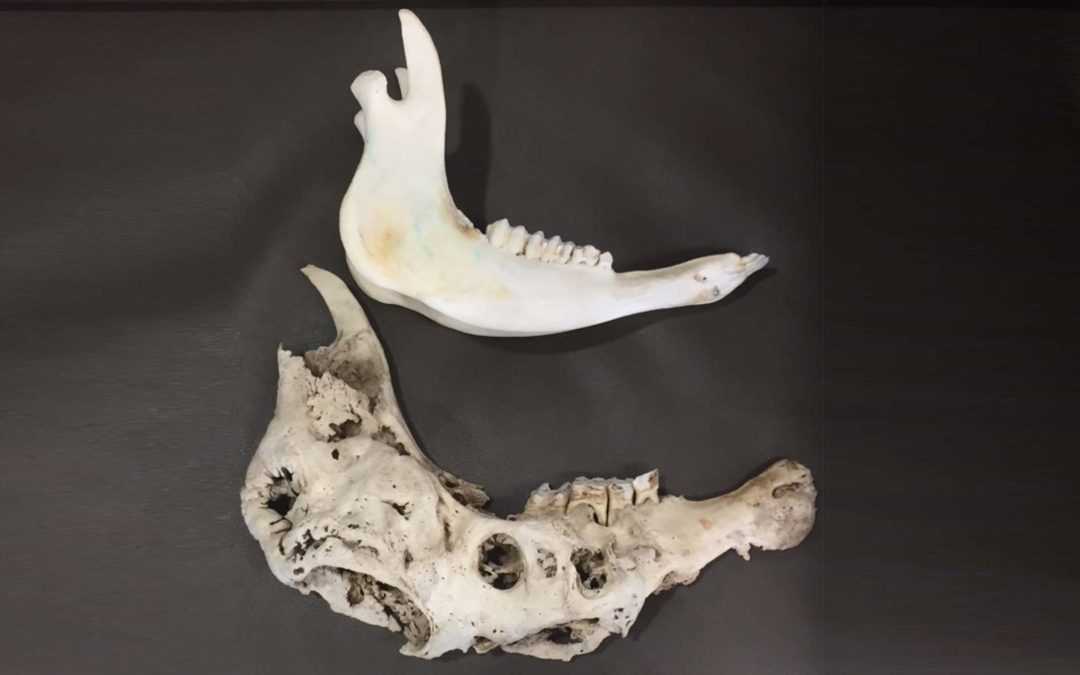 From time to time, lumps and bumps will show up on cattle, often occurring on the head.  Some of these have little significance, while others indicate a more serious problem needing attention.  There are four main causes of discrete swellings on the heads of cattle: feed impaction, abscess, lumpy jaw and wooden tongue.  Here is how to recognize these causes and determine how to intervene.

Cattle spend about 40% of their day ruminating: chewing feed, swallowing it, returning it to the mouth, rechewing and swallowing again.  As this happens, feed can move into the space between the teeth and cheek, appearing as an outpouching of the skin of the cheek.  The vast majority of the time, this will disappear within minutes, a normal part of the rumination cycle. When feed is held in the cheek for a prolonged period or is associated with weight loss or impaired appetite, however, it may indicate interference with proper chewing or swallowing and veterinary examination is warranted. The more common conditions that hinder chewing and swallowing include teeth abnormalities preventing the feed from being properly ground, listeriosis, a bacterial disease of the nervous system that can paralyze portions of the head and inhibit proper chewing and swallowing, and wooden tongue, a bacterial disease that stiffens the tongue (more on this later).  This list would not be complete without mentioning rabies, one of the signs of which can be impaired swallowing.  For this reason, always use gloved hands during attempts to determine the nature of a feed impaction.

Abscesses may appear anywhere on or in the body, with those appearing on the surface of the body typically caused by a break in the skin that allows bacteria to invade the tissue beneath. The immune system then reacts by sending white blood cells to kill the bacteria, resulting in the formation of a pocket filled with pus. “Young” abscesses feel soft and fluctuant, while older abscesses develop a thick capsule of scar tissue.  Abscesses should be treated early in the process before this thick capsule develops, which impairs adequate drainage and healing. Antibiotics are typically not effective in the treatment of abscesses because the infection rapidly becomes “walled off”, keeping the drugs from being delivered to the area. Treatment of abscesses is typically done by drainage and flushing of the pocket. A couple of things make abscesses on the head different from abscesses on the rest of the body. First, some may actually originate from inside the mouth and so examination of the mouth is required to determine if additional treatment is required. Second, the head is a concentrated area of important nerves and large blood vessels that are very superficial, often right below the skin.  For this reason, draining an abscess on the head takes more planning and care than is required on other areas of the body to avoid serious complications. Consult your veterinarian before attempting to drain an abscess on or around the head and neck.

Lumpy jaw, or actinomycosis, is a bacterial disease caused by invasion of the jaw by Actinomyces bovis. This bacteria exploits damage to the inside of the mouth caused by stemmy feed, twigs, or other sharp objects and invades the bone of the skull, most commonly the lower jaw, causing severe infection.  Distortion and excess bone formation are the responses of bone to infection, regardless of location on the body. Typically, only one side of the jaw is affected, but the distortion and swelling can be dramatic. In the accompanying photo, the upper specimen is the normal mandible (lower jaw) of a bovine.  The lower specimen is a mandible affected by lumpy jaw. This distortion interferes with jaw movement and chewing and affected animals lose weight rapidly. The swelling will be as hard as bone, considerably different from the soft, fluid feel of an abscess. Early treatment of lumpy jaw is critical, as it is difficult to access bone with antibiotics. Initiation of treatment early in the process helps ensure more complete control of the infection and prevention of severe distortion. Bone distortion and proliferation are permanent changes that will limit the animal’s productivity in the short and long terms. Your veterinarian may recommend treatment with an antibiotic in addition to a product called sodium iodide.  The sodium iodide may improve antibiotic delivery into the bone. The label of sodium iodide states that it should not be used in pregnant cattle and it should only be administered by a veterinarian as it must be given in the vein and any drug that accidentally escapes the vein may cause serious side effects. If the affected animal has a good appetite, iodine can be supplemented in the feed to support these primary treatments.

Wooden tongue, or actinobacillosis, is another bacterial disease that takes advantage of injuries caused by feeds or other items injuring the interior of the mouth. While the name would imply that this disease only affects the tongue, the other soft tissue of the head can also be infected (gums, skin of the lips, and cheeks). The swelling can be anywhere on the face and, if the tongue is involved, it may hang out of the mouth because it loses its flexibility and ability to move. The term “wooden” is a bit of an overstatement about the texture of the infected tissue: it will be very firm, but will not be hard like lumpy jaw. It also generally will not have the feeling of being filled with fluid like an abscess. Wooden tongue impairs the ability to eat and weight loss ensues. Treatment of wooden tongue is similar to lumpy jaw, but animals typically recover more rapidly and completely from wooden tongue.

Feeding of hay with lower digestibility or that contains twigs and hard stems means an increase in feed impactions, abscesses, lumpy jaw and wooden tongue at this time of year. A trace mineral supplement should be available at all times and one containing an organic iodine can be particularly helpful to cattle this time of year. When driving through cattle, be on the lookout for swellings on the head and face, and be sure to get proper advice and treatment before the disease becomes chronic and body condition suffers.